A Ghanaian farmer has taken his search for a wife to social media, and the requirements and desires have got many people reacting.

Yakubu Ibrahim and Hajia Bintu
The man who claims to be a resident of Sefwi in the Western Region of Ghana made a post on a Facebook group called “Tell It As It’s”.

Identified as Yakubu Ibrahim, the man warned that he is not wealthy, so any woman who might be interested in him must be working so that she will not entirely depend on him for survival.

However, Ibrahim said he would not mind accepting any woman who ticks all the boxes for him as stated in his post but has a child.

He also hinted that he is a lover of big breasts, so any woman who is well endowed, in addition to the other features, stands a better chance of getting him for marriage.

“My name is Yakubu Ibrahim. I stay at sefwi. A farmer. I am looking for a wife. She must be slim and beautiful with nice shape like Hajia Bintu. Fair in colour. I like breast. I don’t mind if she has a child. She must be aged 15 to 25yrs. I don’t have plenty money so she must be working. If you need marriage then come and let’s marry,” Ibrahim wrote on Tell It As It’s on Thursday, April 14, 2022.

However, interestingly, his post has sparked mixed reactions, with many followers of the Facebook group mocking his look, saying he is ugly, while others say it is unfair to describe someone as ugly because he is also God’s handiwork.

Some of the Facebook users said he should not have resorted to Facebook with his image to look for a life partner, and that he brought all the insults upon himself, which he must have seen coming.

Well, it will not be surprising to learn later that Ibrahim has found the love of his life through this same Facebook post that has gotten him into mockery because beauty, they say, lies in the eyes of the beholder. Some people may think he is unworthy of their attention, but there will surely be someone who will love him just the way he is. 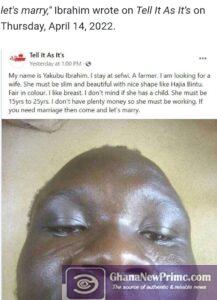 Another challenge is that, he might be committing a crime if he engages in any sexual activity with a girl below 16 years or marries her before she attains age 18
Credit: pulse.com.gh

Your this thing has become too wide – Bobrisky Exposes Tonto Dikeh

OBO and Dababy – Reactions as Nigerian boys drive ‘Lamborghini’ made out of carton.

I love you – Angel tells Jaypaul

Your this thing has become too wide – Bobrisky Exposes Tonto Dikeh

OBO and Dababy – Reactions as Nigerian boys drive ‘Lamborghini’ made out of carton.

I love you – Angel tells Jaypaul

If You Have Any Of These Conditions Do Not Eat Egg

Rihanna Announces Fenty Beauty & Skin Will Be Available in Africa: ‘I’ve Been Waiting for This Moment!’

I started my bussiness with just 300 cedis, but I’m now worth millions of dollars – Tracey Boakye